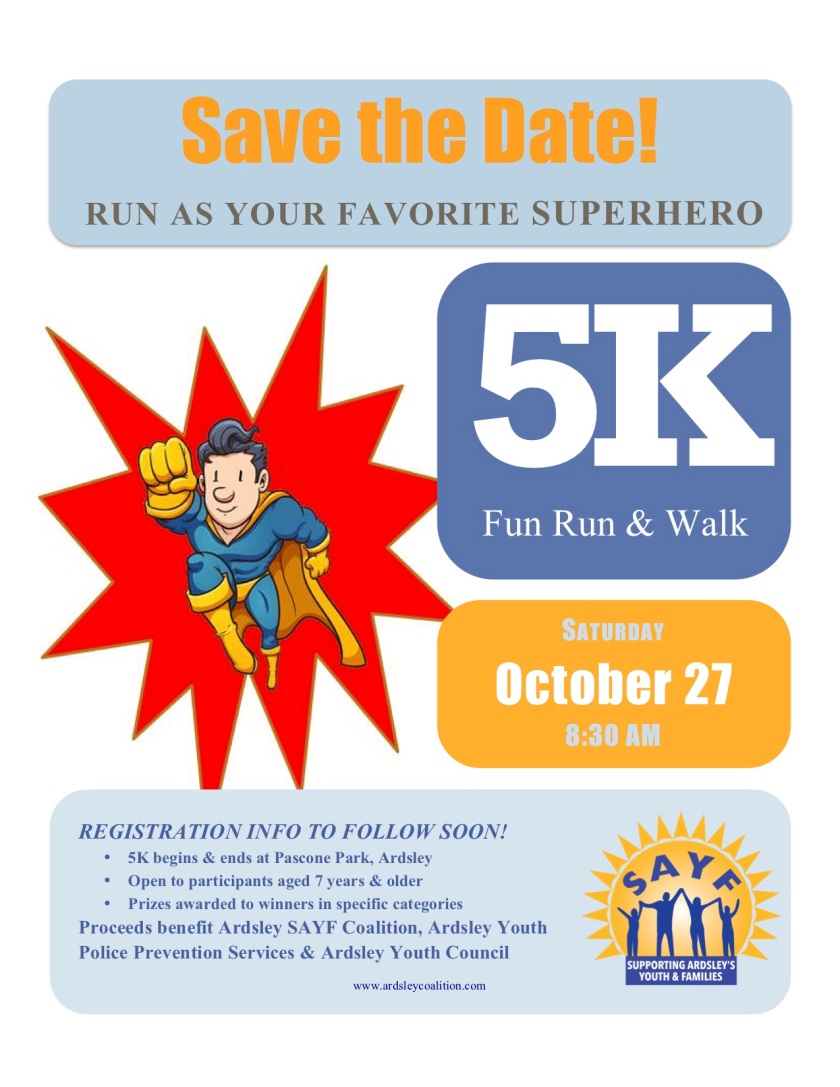 This week we celebrated some of the superheroes from our community who have helped to make our coalition so successful.  Please take a moment to read the tributes below, thanking Lauren Allan, Emil Califano, Marion DeMaio and Peter Porcino for all they have done for the Ardsley SAYF Coalition.

“The SAYF Coalition is dedicated to bringing awareness to the issue of substance use, and to lower the rate of use among our youth. We provide speakers who are experts in their field to keep parents and students informed about the dangers of alcohol, tobacco and other substances. We have many different media campaigns designed to educate as well as to change the social norms associated with youth substance use. You may hear your child say that everybody is experimenting with a particular substance, but that simply is not the case. In order for us to achieve our goals we have to work with many different members of our community. We have representation from law enforcement, government, community civic organizations, parents, students, organizations involved with reducing substance abuse, youth serving organizations, faith based organizations, the media, the medical community and of course, the school district. As you can see from this list we have many superheroes who contribute to the success of the Ardsley SAYF Coalition.

Our first Superhero is a representative from the Ardsley School District, Dr. Lauren Allan.

Dr. Allan is a true Superhero of the Ardsley SAYF Coalition, and she has been a strong advocate of the SAYF Coalition. It’s with her support that we have been able to conduct our student surveys providing the coalition with a snapshot of the pulse of our teens. With this information we have been able to guide our focus on issues that are truly relevant to our community. We are the only school district in the Rivertowns that takes such a public stand on the dangers of marijuana with our 4/20 day activities outside of the high school.

The coalition is always welcomed in the middle and high schools to conduct our substance prevention demonstrations as well as to talk about the importance of being substance free with our students. We are invited to participate in the schools’ wellness fairs and most recently we were asked to participate in the elementary school’s wellness fair giving us the opportunity to talk with 3rdand 4thgraders about the importance of taking care of their developing brains.

But seriously, we know we are very fortunate to have had such support from the School District over the years, and we know this support comes from the top down.  Dr. Allan you have truly been a SAYF Coalition Superhero, Congratulations on your retirement and as a show of our gratitude we would like to present you with this gift of appreciation. Please join me in thanking Dr. Lauren Allan, an Ardsley SAYF Coalition Superhero.

Our next Superhero is a representative from Law Enforcement; Police Chief, Emil Califano. Chief Califano started as an Ardsley Police Officer in 1981, and was appointed Chief of Police in August of 1996. He retired after serving in law enforcement for 36 years.

Chief Califano has been a strong advocate of the Ardsley SAYF Coalition, he has shown his support of our activities by allowing us access to his police department to conduct our compliance checks of local establishments that either sell or serve alcohol. The purpose of these checks is to ensure alcohol is not being served or sold to minors. He allowed his officers to participate in our DWI stops to ensure the safety of our roads and he has supported his Youth Officer to attend meetings in Washington DC where we meet with our state senators and congressmen to talk about the importance of our programs. Having the voice of a youth officer is vital and we appreciate his support. Chief Califano also allows his youth officer to participate in trainings focusing on substance prevention, which is a requirement for our funding source, the Drug Free Community Support Grant.

When I brought to his attention a training opportunity focusing on the pop culture associated with substance use, as well as what is available in our local stores to support this pop culture, a training specifically designed for law enforcement, Chief Califano supported this initiative and allowed us to send the appropriate officer to the training without incurring any overtime for the department. He has always supported the attendance of his youth officer to be a chaperone at a Summer Youth to Youth Conference where we take Ardsley teens to a four day youth summer conference in Rhode Island designed to teach them leadership skills as well as helping them see the importance of living a substance free life. Many teens come back saying the experience has been life changing for them. By having a Youth Officer who participates in these programs it allows him to have that much more connection with the students. This connection is definitely a protective factor which helps to keep our teens away from substance use.

We also wish to thank you for supporting our biggest program that provides a service to the entire community, and that would be our 24/7 prescription drug return box located in the police station as well as the two Prescription Drug Take Back Days we conduct each year. In one year’s time we have collected a total of 531 lbs of unwanted and unused prescription and over the counter medications.

We know the support we have from the Ardsley Police Department comes from the top down, and we congratulate you on your retirement, you now have so much more time to enjoy your new grandchild. Chief Califano you have truly been a SAYF Coalition Superhero, and as a show of our gratitude we would like to present you with this gift of appreciation. Please join me in thanking Former Police Chief, Emil Califano, an Ardsley SAYF Coalition Superhero.

Our next Superhero is a representative from Government, Village Treasurer Marion DeMaio, Mrs. DeMaio moved into Ardsley in 1960 with her husband Tom and together they raised two children. She was appointed to the position of Village Treasurer in 1989 serving the Village of Ardsley for 29 years. Her dedication to the Village she loves is evident in her work.

When the coalition wanted to apply for the Federal Drug-Free Communities Support Program Grant we approached the Village and asked if they would be willing to take on the financial responsibility of the funds. We were very grateful they said yes, and I know Marion was a major influence in that decision.

I know Marion shares the same passion as our coalition members do in bringing awareness to the dangers of alcohol, tobacco and other drugs. When we offered to pay her a stipend for her efforts she refused and told us she would rather see those funds go towards our programs.

For the past 7 years I have had the honor of working very closely with Mrs. DeMaio, to fulfill the federal financial requirements of the grant. If you are someone who works with the federal government, then you know you have to change your password every 90 days on their websites. Marion I will miss the laughs we had with signing into the system over the years and coming up with all those passwords. I’ll even miss our discussions about her love for Willy Nelson.

Our next Superhero for the night is another representative from government, Former Mayor Peter Porcino. Mr. Porcino moved into Ardsley in 1986 with his wife Susan and together they raised two children in Ardsley.

Peter started his public service in Ardsley by serving on the Board of Architectural Review from 1996 to 1999. From there he moved onto the Zoning Board of Appeals where he served from 1999 to 2005. He was elected to the Village Board of Trustees in 2005 and became the Deputy Mayor in 2006. He was elected Mayor in 2011 and held this position until December of 2017.

What you don’t know about Mr. Porcino is he is also a founding member of the Ardsley SAYF Coalition. Back in 2009 the Ardsley School District participated in a National Youth Substance Use study conducted by Albert Einstein School of Medicine. When the school district received the results of the study it was a wakeup call. The results were shared with the Ardsley Youth Council which I was a member of at the time. The School District and the Village of Ardsley decided something had to be done to address the rate of use among our teens. The decision was made to join forces and try to bring awareness to the issue of youth substance use. We also knew that if we didn’t get the whole community involved in this endeavor our chances of making true change would be very difficult as other committees who have tried to tackle this issue had formed and fell apart.

When Peter was approached and was told about this new committee being formed in the community he stepped right up and made it happen. He didn’t just make it happen; he also dedicated his time and served to the cause as a committee member. That committee is now the Ardsley SAYF Coalition. Peter helped set the direction of the coalition as we were in our early planning days, Peter was able to see the importance of this issue and he believed in it so much that he petition for the Village of Ardsley to take the lead of the committee. We can actually say that if it wasn’t for the insight of then Trustee Porcino to support this cause, the Ardsley SAYF Coalition may not be here today. So thank you for having the wisdom to see the importance of the work we do. 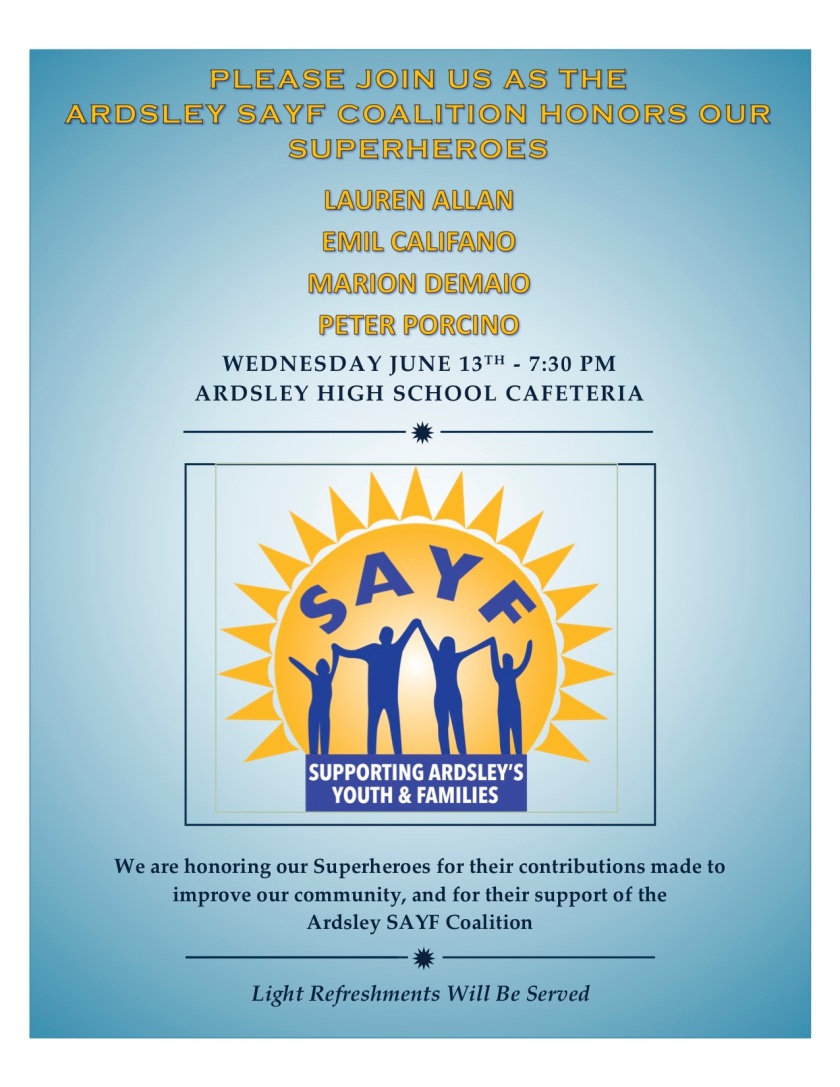